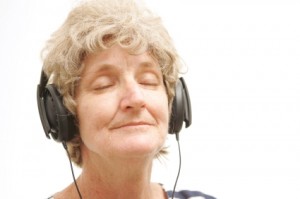 Another great article at Aging in Action describes a study that concluded that a relatively inexpensive (and fun to implement) intervention may be useful for reducing anxiety among individuals with dementia. The authors hypothesize that the music contributed a sense of familiarity and stimulated pleasant memories for the participants, which is likely to ring true for those of you who share music with loved ones with dementia.

According to the article:

Earlier this year the Journal of Clinical Nursing published a study (Sung et al 2010) on the potential for music to reduce anxiety in older nursing home residents with dementia. The researchers compared two groups of residents in Taiwan, at the same nursing home: a control group of twenty-three who received standard nursing care, and twenty-nine residents in an experimental group who spent 30 minutes listening to music of their choice, twice a week for six weeks, as provided by their nursing staff. At the end of the six weeks, the older adults who had been listening to their preferred music had significantly lower scores on an anxiety test (i.e., less anxiety) than their peers who received standard care, and significantly lower than they’d had at the beginning of the six weeks.

See the entire article at Decrease the anxiety of nursing home residents with dementia by playing their favorite music.