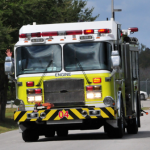 A few weeks ago, families of Seniors in San Diego County were following a story as it unfolded halfway around the world. That Friday morning, a terrible tragedy struck a hospital in the Indian city of Calcutta, resulting in the loss of the lives of many patients. A fire that started in the basement of the hospital quickly spread to higher levels, trapping patients that were unable to escape on their own. A disaster of this magnitude always exposes flaws in the preparedness of a health care facility, and a number of those flaws led to unnecessary fatalities in this particular instance.

Emergency rescue workers and firefighters had trouble reaching the hospital because of crowded, narrow streets and inadequate access routes. In the end, firefighters had to break down the main gate to the hospital in order to get equipment and vehicles close enough to fight the fire. The time consumed by these efforts was time that the victims trapped inside the burning building could not spare.

The most unsettling part of this story for families of Seniors in San Diego County, however, was one that was rumored almost immediately and was later confirmed by surviving patients and other eyewitness reports. The hospital staff members, rather than springing into action to evacuate patients and help those who were unable to help themselves, appear to have fled for their lives and left their patients to fend for themselves.

Our sense of ethical behavior recoils at the thought of this response by medical professionals who have committed themselves to give their trusting patients the best care they possibly can. In an emergency situation, these patients need the assistance of their caregivers more than ever.

For those who have elderly loved ones in need of professional care, the incident hits very close to home. Can they be confident that their parents’ in-home caregivers  would react differently in a similar situation? It is not out of line to have a conversation with those in-home caregivers about emergency preparedness and their intentions about helping their clients escape a disaster such as a fire, earthquake, tornado, or even a terrorist attack.

The unexpected nature of the hospital fire in Calcutta illustrates the fact that we never know when or how our aging family members and loved ones could be placed in grave physical danger. It is our responsibility to make sure that these vulnerable seniors have access to reliable communication and are cared for by committed caregivers in San Diego County who are qualified and willing to help them through possible emergencies.