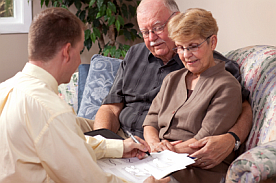 In Part One in this series, we suggested that you select one specific family member to manage the filing of the Long Term Care Insurance (“LTCI”) claim.  We also recommended that your be prepared for LTCI companies to not be very helpful when it comes to getting claims filed and accepted.  In Part Two, we will describe how LTCI companies delay, and sometimes even avoid, paying LTCI claims.

Insurance companies may have “customer service” or “claims” departments, but all those departments are required to do is:

That sounds simple, but in most insurance companies those departments do the following in carrying out their duties.  This becomes an iterative process in which they:

By following the process steps above, the insurance companies are often able to delay paying claims for several months by doing this, and they get to keep the money and continue earning investment income and interest on it during that time.

They do so by discouraging people from trying to file or complete claims.  The insurance company makes more money if you give up after you receive their requests for more information or corrected information.  They will make more profits if you give up and don’t complete the claim.

They also will usually send you a notice if they haven’t received the information they require from you within a certain period of time.  Often, they do so after 30 days.  They discourage claimants by sending a letter which states that they haven’t received any response in reply to their latest request for forms or information, so they are closing the claim.

The letter may be factually correct but it often does not include one key additional fact: you can still complete the filing of the claim from where you left off, and you don’t have to start over again, so long as you send them the information needed within 30 or 60 days of receiving the letter.  They make more money though if people just give up after receiving the letter.

So, remember when you first contact the LTCI company to ask how to file the claim, tell them you want them to send you a list of all the information and forms that they will require you to send them, and if they later contact you to ask for more, or different, information, point out that you already asked them to tell you what they would require, and that they are changing the rules by not accepting what you sent them the first time.  Ask to speak to a manager or supervisor if necessary.

Also, if they send you a letter saying that they’re closing the claim because they haven’t received any information from you, don’t give up.  Just send them the necessary information, right away.

In Part Three of this series we’ll look at how LTCI companies delay and even, in some cases, avoid paying LTCI claims by making the process so slow and lengthy that some people just give up, and how to prevent that from happening.

A Servant’s Heart Care Solutions has assisted many clients and their families file their LTCI insurance claims since 2003.  It would be a privilege for us to have the opportunity to help your family as well!