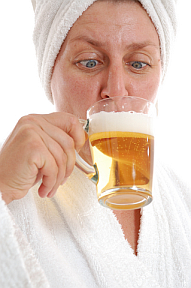 Watching TV, knitting, playing bingo…there are some activities that most seniors seem to enjoy. One popular pastime among the elderly may surprise you, however. A new study, conducted by the Center for Disease Control, reports that the demographic section that does the most binge drinking is that of seniors over 65 years old.

Never mind the stereotypes of college parties and midlife crises; the elderly are the ones among us who go on drinking binges more often than anyone else. This shocking statistic should be a source of great concern to the adult children of seniors, especially ones who spend a significant amount of time without a family member or personal attendant nearby.

Home care in Solana Beach and elsewhere may help reduce this destructive habit by offering companionship and support to combat the loneliness and depression that can lead to binge drinking in the first place.  When cheerful, professional companion caregivers are with them, Seniors and others don’t have time to be sad and lonely.

First, the specifics of the study: The CDC defined “binge drinking” as having over four (for women) or five (for men) drinks at a time. According to the published results of the study, the average senior over 65 who goes on drinking binges does so five to six times each month. That’s more often than once a week. To be clear, the senior demographic was not the one with the most overall binge drinkers—that dubious award goes to the 18-34 age group. Among all Americans who binge drink, the average was four times per month—one to two times less than the average among seniors.

Dangers of Binge Drinking by Seniors

A senior who drinks frequently exposes himself to a number of dangers, particularly if no personal attendant is at hand to help. Falls, injuries, hazardous mistakes, and errors in judgment are all far more likely if an already-frail elderly person is further impaired by alcohol. Obviously, getting behind the wheel of a car is an unthinkable mistake for a senior who is under the influence of alcohol. Even if a personal attendant is near to help in this situation, the disorienting effect of heavy drinking can cause the senior to react irrationally toward him.

The destructive illnesses that result from excessive alcohol intake are more damaging to elderly bodies than to younger, stronger ones. Also, seniors who take a number of different medications run the risk of suffering a dangerous reaction between drugs and alcohol.

Why do some seniors drink so often? It may be that they see it as a way to cope with disappointment, loneliness, and uncertainty about the future. Loving family members and home care in Solana Beach or elsewhere can help elders confront life’s challenges in a more wholesome way with companionship and real encouragement, along with supportive services and assistance that make life more enjoyable.