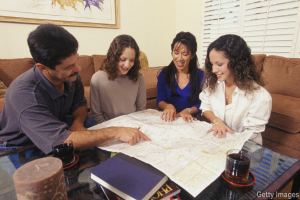 (ARA) – An earthquake strikes a community and looting and violence follow. A tax protestor crashes a plane into a downtown building. Headlines alert you to arrests of terrorism suspects in communities you thought of as stable and safe.

Reports of terrorism, natural disasters and other crises may seem overwhelming, but it’s important to know you are not powerless to protect your family. “The good news is there are things we can all do today to be prepared and take responsibility for the safety and security of ourselves and our families. Seconds count in an emergency, so preparation can make all the difference in the world,” says Capt. W. Andy Cain, USN (Ret.), a Homeland Security Advisory Board member at Colorado Technical University.

A recent Omnibus survey, however, indicates that 66 percent of us don’t think we would know what to do in the event of a terrorist attack in our hometown.

Homeland security professionals charged with protecting the homefront are even less convinced of the average citizen’s preparedness. More than nine in 10 professionals (94 percent) surveyed feel that Americans wouldn’t know what to do in the event of an attack, even though a majority (75 percent) believes the U.S. will experience one similar to Sept. 11, 2001, in the next five years.

The surveys were commissioned by the National Homeland Defense Foundation and Colorado Technical University, which offers master’s and doctoral degrees with a concentration in homeland security.

“The fact that homeland security professionals expect another terrorist attack similar to 9/11 within the next five years while at the same time believing most Americans are unprepared is a dangerous combination,” says Cain.

While law enforcement and government officials are on the front lines of responding to terrorist threats, here are five steps that all Americans can take to feel more secure and prepared.

* Create a family emergency plan
Know who to call and what to do in case of an emergency such as a terrorist attack. Make a plan that includes each family member’s contact information, as well as an out-of-town contact who may be in a better position to communicate among separated family members and may live far enough away not to be directly impacted by the same event. Online tools, like a family emergency kit featuring easy-to-use forms, are available for download at Ready.gov.

* Determine a meeting place
Family members may be in different locations when a terrorist attack strikes. Establish an agreed-upon location for everyone to meet to help save time and reduce stress.

* Get an emergency supply kit
To prepare for a possible emergency situation, including a terrorist attack, it’s important to focus on survival basics – fresh water, food, clean air and warmth. Put together an emergency supply kit that includes items like bottled water, non-perishable food, a first-aid kit, dust masks and blankets. Other essentials could include a flashlight with extra batteries, cell phone with chargers and a battery-powered radio to stay abreast of the news. FEMA.gov, among other Web sites, offers a disaster kit checklist.

* Have a communication back-up plan
Some terrorist attacks may cause communication network interruptions, preventing a person from getting through to family, friends or emergency personnel. If phone lines are down, have e-mail addresses available. In addition, text messaging may still work despite phone service disruptions. The American Red Cross also has a “Safe and Well” Web site available through RedCross.org, where families can register to let others know about their welfare.

* Sign up for alert services
Many communities have systems that will send instant text alerts or e-mails about emergencies and related action steps. Sign up by visiting the local office of emergency management Web site.

Ready.gov features more information to empower and educate Americans on what they can do today to be prepared should a terrorist attack or disaster strike.