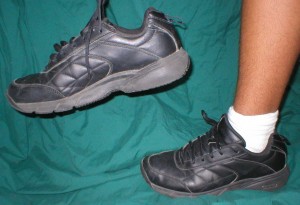 …and waiting for the other shoe

I started to post this on National Respect Day. When I saw some information linking that date to domestic violence issues, I thought it would be respectful to hold off on my post. Domestic violence is a very important issue; I don’t want to detract from that.

The topic of my post is important, too. It’s not domestic violence, but it is domestic danger.

I suppose I should preface this post with one of those generic statements that absolves everybody who isn’t me of responsibility for its content. The views expressed in this post are strictly the opinion of its author. They do not represent the views of A Servant’s Heart Care Solutions as a whole, or any of its representatives (unless they say otherwise).

Now that the disclaimer’s out of the way, I’ll ask again: What is respect? I mean, is keeping your mouth shut in the face of potential danger respectful…or neglectful? Here’s my piece; speak yours in the comments.

When we were kids, our parents told us tings we could and couldn’t do. They regulated our activities and generally got on our nerves because they could see inherent dangers in what we were planning (or doing). Sometimes we had no idea that there was any danger (ever, at all). Sometimes we knew about the dangerous possibilities but decided the activity was worth the risk — or that the danger was half the fun.

No matter how much we hated our parents at the time, we can look back now (most of the time) and see that they were right. A lot of us have even put the same restrictions on our own children. We know that they may not understand now, but now matter what they say when we put the brakes on — they know we love them. Eventually, they’ll understand that we were only doing what we thought best for them…maybe.

Even if they stay mad forever, they’ll be mad and safe. We can rest secure in the knowledge that we protected them. So they’ll be alive and physically and mentally ready able to carry their grudges and plot their revenge.

I can’t count the number of times in my life that I’ve heard an adult say of a parent, “I told her she shouldn’t do that because she’s going to hurt herself, but you know her…”, or “He really needs a handrail in the shower, but he doesn’t want one.” Statements usually followed by sighs and, “I get so worried. I just know he/she is going to be seriously injured one of these days, but what can you do?”

From my perspective, the answer in the first situation depends on the situation. The answer in the second — install the handrail. Once it’s intalled, your parent will have a few options: uninstall it (tedious and unsightly); refuse to shower; or ignore it (until he instinctively reaches for it when slipping). In either case, at least you’ll know that you’ve done what you can to keep them safe. They’ll be alive and physically and mentally able to sustain a grudge, plot their revenge, and cut you out of the will (parents have one more card than kids).

I’ve watched this situation develop in several families and have been a participant in more than a few discussions, a few stand-offs, some surprise attacks, and a couple of coups. I haven’t had direct experience confronting a senior parent, but I’ve told my dad off about his exercise habits when he was a heart attack survivor. I’ve told my mom to sit down when she was asthmatic and still trying to do. My brothers and I all had that kind of relationship with our parents — and we extended it to the other adults in our lives.

Sometimes people got angry. Sometimes the things we did were undone or ignored. Sometimes we felt hurt. For the most part, though, that knowledge that you did your best to protect someone acts as a pretty good shield. Twice in my life I’ve failed to wield that shield. I don’t know that things would have worked out any differently had I followed a different course — I never will. I do know that by speaking my piece here, I’ve done what I think best to protect you from the same situation.

The comments section is calling for you.