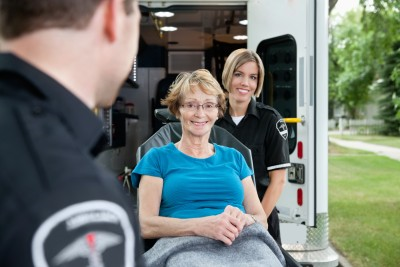 Often, it is notoriously difficult for family caregivers or professional companion care near Vista to tell whether a senior has had, or is having, a stroke. There are many other health issues that share symptoms with a stroke, and those symptoms are sometimes subtle to the onlooker to begin with. Developers think they have found a solution that—while rather cumbersome now—can become convenient enough to have real results and hopefully save lives.

One of the major signs that caregivers learn to look for to identify a stroke is irregular eye movement. While strokes always carry this sign, there are other disorders that do the same—vertigo and inner ear problems are two common ones. A highly trained doctor may be able to tell when eye irregularities indicate a stroke, but the average person has little to no chance of doing so reliably. The new solution in development would put technology to work to do the investigating, rather than an untrained responder.

The device currently under consideration is a pair of glasses, or goggles, that isn’t built for seeing—it’s built to look at the wearer’s eyes themselves. The goggles monitor eye movement and detect the minute but telltale signs of a stroke. The process only takes about one minute, giving doctors hope that it could save lives when fast reaction is critical.

The Future of the Stroke Detector

Ideally, the device will become fully tested (it’s had great success in small-scale trials so far) and made affordable enough to reach seniors at risk of stroke. Developers hope to link the device to a network, so that a professional in companion care in San Diego County could view the eye test results instantly on a smartphone.