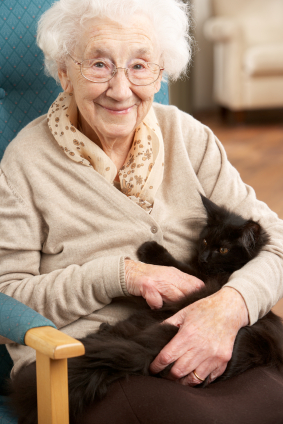 Eventually, there comes a time when elderly parents in North San Diego County must write their will, stipulating their wishes for the disposal of what they own. Most of the time, this involves money, property, and other assets, but when pets are included, things can get a little bit complicated. Take, for example, a recent case in which a lady indicated in her will that any cats in her ownership be humanely destroyed after her death.

The bank that was responsible for carrying out the wishes of the deceased wanted to find a way out of fulfilling that particular one. There was one cat in question, an eleven-year-old feline named Boots. Instead of taking Boots down to the local Humane Society for euthanization, representatives from the bank looked for legal precedents that would support their case. As it turned out, similar will requests had been made—and contradicted—in the past.

If your elderly parents in North San Diego County are considering adding a pet death sentence to their will, they should be warned that they might not get their wish. In at least two cases, dogs and horses were allowed to live in peace instead of following their owners off the mortal coil. Boots got the same verdict, with the judge ruling that he could live as long as a responsible person or agency agreed to care for him. With the help of some financial support from the estate, a cat-loving group in the area became Boots’ new home.

Elderly parents in North San Diego County can usually find better options for the future care of their pets than simply asking that they be put down. There may be local pet adoption agencies that would be willing to take in dogs or cats, or the seniors’ children could inherit them as a special living reminder of what their parents enjoyed. Including pets in wills can be tricky, so it is best to consult with a lawyer about how best to do so.